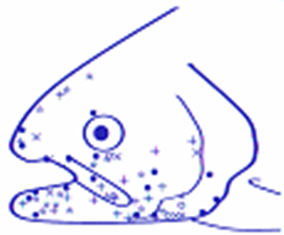 Illustration showing fish hook and “pain” receptors in trout derived from Lynne U. Sneddon, Trigeminal somatosensory innervation of the head of a teleost fish with particular reference to nociception,Vol. 972, Brain Research pp. 44-52 (May, 2003) (Figure 1).

Many years ago, as fathers and sons are apt to do, Keller and I came together over a fishing rod, or more precisely, a cane pole. Our sojourn took us to a small pond in the hinterlands of the high plains of America. A fish was caught by the boy as the father looked on. Years passed.

As it turns out, fish, fetuses and the idea of pain have more in common than one might think. Not surprisingly, we talked about our work and how our inquiries intersected. What follows is a thin thread from that discussion, but it represents only my thoughts, and not Keller’s.

While doubting that a fetus is aware of pain in a manner comparable to that felt by a human being, the Royal College of Obstetricians and Gynaecologists acknowledges that there “is disquiet [my emphasis] in denying a rawer, more primitive, form of pain or suffering that the fetus . . . and many animals might experience.” (RCOG, Fetal Awareness―Review of Research and Recommendations for Practice, at p. 6 (March 2010).) Several years back, Annie Murphy Paul beautifully elaborated on this anxiety when discussing the issue of fetal pain. (Annie Murphy Paul, “The First Ache,” New York Times Magazine (February 10, 2008).) As for fish, Professor Victoria Braithwaite’s book (Victoria Braithwaite, Do Fish Feel Pain?, Oxford University Press (2010)) collects and presents solid reasons for a similar unease.

It becomes difficult to reject, out of hand, the idea that fish feel some form of pain, albeit not akin to the human experience, when one realizes that fish can learn to avoid frightening stimuli (such as a plunging net), which in turn suggests long-term memory, or that fish, when injected with acid, rub themselves in an apparent effort to shed themselves of the irritant, or that morphine appears to work on fish, or that some fish have receptors associated with the transmittal of pain in higher vertebrates. Similarly, when one understands that fetuses as young as 18 weeks show a spike in stress hormones and a defensive shunting of blood to the brain when subjected to an invasive procedure, but those responses can be dramatically reduced by the administration of analgesic, one might also question assertions that fetuses are incapable of suffering pain.

While I am persuaded that fish and fetuses probably experience some form of pain, I have no definitive answers about the morality of fishing or abortion. This is partly because the underlying questions are so hard. For example, each time I turn to the question of morality, I trip over a mind-numbing series of conundrums. What do we mean by “pain?” What if a fish (or a fetus) cannot distinguish between pressure and pain but perceives both as the same thing? How does one prove or disprove that organisms such as fish and fetuses are “conscious” of pain, although that pain may be “raw” and “primitive?” That is, must an organism be able to think about thinking to be conscious of pain? Is sentience (the ability to perceive sensation) the equivalent of consciousness? If not, what are the material differences and should those differences matter? And the difficulty of understanding consciousness scientifically is daunting enough without also trying to understand and synthesize how philosophers of morality approach the question for beings like fish and fetuses that are unable to speak. (E.g., Rene´ Descartes, “Animals Are Machines,” in Passions of the Soul (1649).)

It is facile to deride the idea of pain and snicker at those who genuinely fear that fish and fetuses suffer. There is mounting evidence that creatures great and small suffer a sort of pain, and we should not pretend that is not so in order that we may continue as if the infliction of pain were not an integral part of abortion―and fishing. Conversely, it is nonsensical to anthropomorphize fish and fetuses–particularly when weighed against the life and liberty of a living woman–based upon the egocentric notion that those organisms are no different from the human beings who study them. Fetuses do not scream, and Charlie the Tuna is a cartoon character.

We know far too little for bans on fishing or abortion. We know far too much for neglect. Small, incremental steps designed to address pain―but premised only on hard science―hold out the only hope for a rational resolution. That will not satisfy the true believers, but it is the truth.

So, I will end as I began—at a pond. The boy now has a darling little boy, and the father now has a grandson. His name is Fletcher. Someday soon, I will take Fletcher fishing. When I do, it will be with a sense of awe and humility.

*R. Keller Kopf, Ph.D.  Postdoctoral research fellow, Institute for Land, Water and Society, Charles Sturt University, Albury, Australia.  He is the coauthor, with P.S. Davie, of “Physiology, behaviour and welfare of fish during recreational fishing and after release,” New Zealand Veterinary Journal 54(4), 161-172 (2006) and “Phylogeny of Cognitive Development and the Capacity to Suffer,” Australian Department of Agriculture, Fisheries and Forestry (2010).  Again, the thoughts expressed in this essay are mine alone.

**I authored both of the federal district court opinions involving Dr. Leroy Carhart on the subject of partial-birth abortion that were ultimately resolved in the United States Supreme Court.  I have since recused myself from abortion cases for reasons unrelated to this essay.