Yesterday, I drove to Omaha. In the morning, our quarterly meeting of the Nebraska Judicial Council (“judges meeting”) was held. We govern our court in a very unique and open way. See here for more. In the afternoon, I prepared for the weekend by sentencing two men to prison. This all occurred in the Roman L. Hruska United States Courthouse in Omaha.

Every time I enter that courthouse, I find the place awe-inspiring. It is ironic that the People have provided us with this iconic building but the legislative entity most responsive to the People, the House of Representatives, has recently thought it appropriate to deny the federal judiciary the pittance necessary to operate the federal courts and the beautiful buildings we judges are privileged and honored to occupy. Today, I thought it might be interesting to readers of this blog to learn more about the Hruska Courthouse and this post endeavors to provide a brief tutorial about the building.

The Hruska U.S. Courthouse was the first in the Nation commissioned under GSA’s Design Excellence Program. On October 24, 2000, thirteen years ago this week, the building was dedicated at a ceremony where hundreds of attendees heard the address of Justice Clarence Thomas. The Design Excellence Program seeks to improve the quality of public design by using a “key design” architect.

James Ingo Freed, of Pei Cobb Freed and Partners New York, New York, was selected as the key design architect. He was also the designer of the U.S. Holocaust Museum in Washington, D.C. and the Ronald Reagan Federal Building (at Federal Triangle) in Washington, D.C. At the completion of the Holocaust Museum, ABC/Barbara Walters selected him as one the 10 Most Influential Americans. Mr. Freed, who I had the great pleasure of meeting at the dedication, was a visionary. His biography at the Pei Cobb Freed website is here.

Mr. Freed died in 2005 while suffering from Parkinson’s disease. I am told that he designed our building without being able to use his hands to draw. Indeed, proving his unusually strong commitment to the importance of our project, Mr. Freed came out from New York and attended our dedication while in a wheel chair. He was frail but extraordinarily bright of mind and spirit. My career law clerk, Jim Eske, spent the day and evening attending to his needs. Truly, Mr. Freed was a remarkable man and we are deeply honored that our building is associated with his name.

The courthouse is a rectangular shaped structure, with an area carved out on the front to allow light into the interior atrium. A four-part atrium roof feature gives the building a unique profile, while allowing large skylights to illuminate the atrium.

The Hruska U.S. Courthouse has two bronze grilles by the distinguished sculptor Stephen Robin, of Philadelphia, Pennsylvania, which were funded by the 1/2 percent for art set-aside under the Art-in-Architecture program. The 22 1/2 feet tall by 5 1/2 feet wide bronze grilles are set into the pre-cast concrete column covers adjacent to the North and South sides of the monumental stairs in the atrium. The bronze grilles are allegorical figures of plants associated with the Midwest. The North grille represents corn/maize and goldenrod (the State flower of Nebraska). The South grille represents wheat and sunflowers.

The building is named after U.S. Senator Roman L. Hruska (August 16, 1904 – April 25, 1999). Unfortunately, and unfairly in my view, Hruska became the object of derision as a result of a poorly phrased remark about “mediocrity” and Judge G. Harrold Carswell’s failed nomination by President Nixon to the Supreme Court. That aside, Senator Hruska was widely regarded by those in the know as one of the most influential United States Senators in the last half of the 20th century when it came to matters involving the federal law and the federal judiciary. See, e.g., Robert H. Bork, Dedication: Senator Roman L. Hruska, Yale Law School, Yale Law School Legal Scholarship Repository (1976). As the New York Times observed at his death, Hruska “served 22 years as a conservative Republican senator from Nebraska” and, as the ranking member on the Senate Judiciary Committee, he “wielded considerable influence on the Judiciary Committee.” I got to know Senator Hruska near the end of his life when he quietly donated a large sum to fund the Nebraska Bar Foundation’s Roman L. Hruska Institute for the Administration of Justice. The Institute is devoted primarily to the study of federal law by bringing distinguished speakers to the University of Nebraska College of Law. Various legal luminaries have graced the Institute podium including Justices Kennedy, Breyer, Ginsburg and Thomas, and Michael D. Kirby, retired Justice of the Australian High Court.

Below, you will find several photographs of this beautiful building. I hope you enjoy them. Next time you’re in Omaha, let me know and we’ll provide the grand tour and a cheap lunch with a decent beer.

View from the West on a cold day 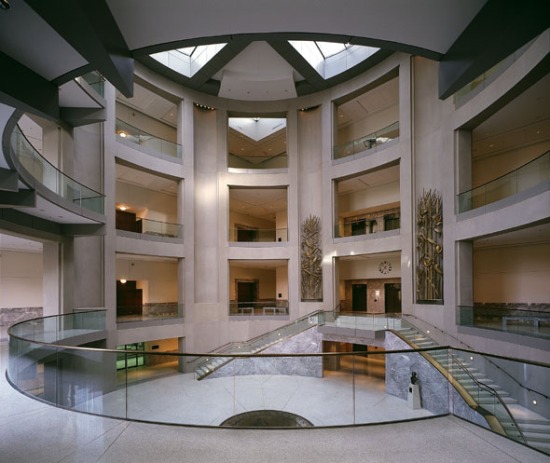 Here is the courtroom I used on Friday. It is typical of the four main trial courtrooms. The Special Proceedings Courtroom is similar but larger.  The jury box is to the right in this picture, and not shown.