During the discussion last week about Judge Scheindlin. and the Second Circuit, several commentators suggested that it was only left-leaning judges who seemed to get into ethics problems. I did not think that was so, and today I will provide an example of why I don’t think that is so.

Consider the most recent attack on Judge Diane Sykes of the Seventh Circuit. She interviewed Justice Thomas on stage at the Federalist Society’s recent dinner “gala.” Because she allegedly did that at a “fund-raiser,” Representative Louise Slaughter, Arn Pearson, Vice President for Policy & Litigation, Common Cause, and Nan Aron President, Alliance for Justice filed a complaint with the Seventh Circuit against Judge Sykes. See here for the complaint. The only problem was that the dinner lost money and did not serve to raise funds, so said the Federalist Society. See here.

First, two observations about the creepy Federalist Society and its equally strange double, the American Constitution Society (ACS). Here they are:

* The Federalist Society and the ACA are like the Girl Scouts and the Camp Fire Girls of my youth. They wear matching uniforms, parade around mouthing similar slogans, and specialize in making macaroni art that is inedible. In the main, however, they are harmless.

*For among other reasons, I never attend Federalist Society or ACS gatherings ’cause I don’t appreciate fine wines. See attached photo.

Finally, and what follows is the important point. The next time you hear that a federal judge has violated the Code of Conduct, think about that claim as a “drive-by shooting.” 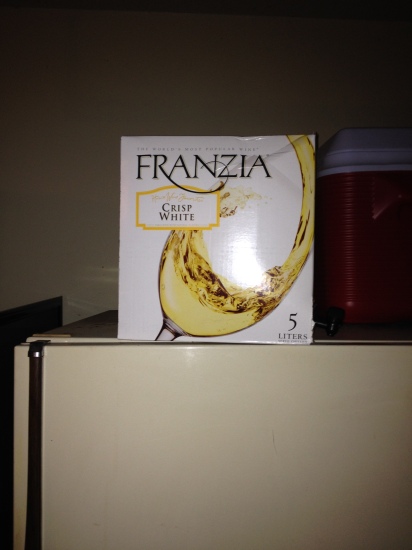 RGK’s box wine on the beer ‘frige in the garage