I relate to lawyers in a general practice, particularly a rural general practice. They labor in obscurity and mostly for small pay. But, they do good work for real people. Along the way, they build up strong relationships with their partners and clients. Frequently, they also have real stories worth the retelling.

One of the readers of this blog recently wrote about her father’s firm.  Jill described the genesis of the firm this way:

Firm started with Grandpa Carl who was country lawyer. Liked his beer, cigars, betting horses, and cockfighting. My dad and his bro Ed joined in 1950s. McMahon&McMahon. First office on Broadway in Saratoga Springs [New York]. Moved to present location (location, location) on Lake across from SSPD in 1956, Cousins Pete and John Coseo [later] joined firm . . . . I worked off and on since . . . doing legal and medicolegal research, etc.

She then went on to describe the big news:

Excitement at the law office today! A mink/weasel was trapped in the office! We had been hearing weird noises overhead for 2 days- pigeons cooing, but other scampering noises. It’s an old row building and birds, especially, try to get in and nest. This AM, my co-worker who comes in early heard something when she came in. She ran upstairs to her desk and heard something running up the stairs after her. Then she saw it dashing around and said it looked like a weasel. She shut herself in her office and called Dad and Pete [cousin]. Pete came in from the back lot, left the door open, and rummaged around hoping to drive it outside. Afterwards, they found a ceiling panel knocked aside where it came in from the walls. Also, it chewed the heck out of the blinds in Pete’s office. In case you’re wondering, we were planning to call a “wildlife remover” . . . . [but] Pete had [a deposition] . . . with the thing running around in the walls.*He said it was pretty quiet . . . [so nothing was done to hunt the critter down].

As it turned out, the weasel was still in the office. I heard it on the cellar stairs near my work area. I was the last one out of the building that evening, so I left the mail slot slightly ajar, thinking it could squeeze out that way. We haven’t heard it since. Current thinking is it probably followed the pigeons in, hunted and ate them over 2 days, and left for better hunting grounds. I have seen mink crossing streets late at night. Another 2 or 3 blocks, and they are right downtown. My dad misses the pigeons, sort of. They used to coo when they heard him in his office. 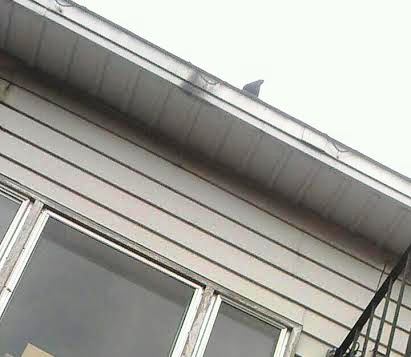 “Pigeon on guard. Looking down from roof above Dad’s office. About month or so, ago. RIP.”

Now, that’s a genuine story about a general practice.  It has all the ingredients: a family of lawyers, a small town, weird depositions, old buildings with second story offices, scampering weasels, a cellar, fleeing secretaries and pigeons that coo until they meet a violent demise. While there are computers in use, the figurative quill pen, and all that means, is alive.

Legal realism at its finest. Thanks to Jill P. McMahon for helping me remember what it meant to be a real lawyer all those many years ago. It is a very warm memory this cold and grey Christmas day.

*Observation by RGK: Not the first time a weasel attended a deposition.