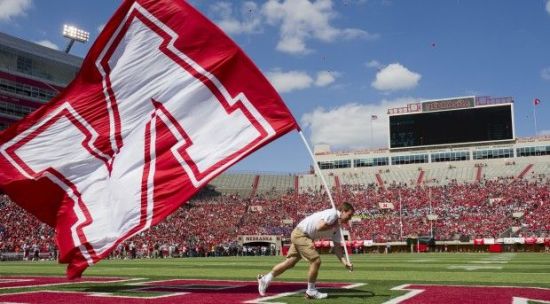 This afternoon the Nebraska Cornhuskers will hold a scrimmage called the “spring game.” Between 40,000 and 50,000 people will pay ten bucks to watch this annual event in Memorial stadium. Radio will broadcast the “game” live throughout all of Nebraska, and the Big Ten network will carry the game on a tape delay this evening. Joan will listen to the live play on radio and, later, watch the “game” on TV. She will be keying on the offensive line and scream filthy words when the pulling guard misses a cut block on the middle linebacker.

I won’t be attending. As expected, my immune system is now officially compromised* and my hair is beginning to fall out. That is to be expected. I am supposed to avoid crowds and particularly sick people and wash my hands like an obsessive-compulsive. Despite my minor affliction, it is all good. How could it be otherwise? Nebraska football is back in our lives.** And the river of life flows on.***

**We have season tickets for the fall. We give the tickets away as gifts to friends, family members and my staff. If you are ever out this way, let me know and you can have two tickets free of charge. (I am entirely serious about this offer.) Once in  your life, you must go to a Nebraska game.  It is Americana at its best. Situated right downtown, the packed stadium of 90,000 or so shuts down the capital city of 250,000. Everyone, everywhere wears red even though the wearer may not be attending the game.

***Keller, our son who is now in Australia, played in Memorial stadium when his high school team won the large school state championship.  Seeing his visage on the big screen was one of the highlights of my life.