By and large, I like lawyers. This may seem strange coming from a judge who was once a lawyer. What else do you expect? Well, the answer to that question is not as obvious as it may seem. Over time, judges can begin to detest lawyers. That is because we see a lot of really bad lawyers who are really bad people.  But most of the lawyers we see are proficient and descent men and women.

Keeping the foregoing mind, I turn to the travails of Federal Circuit Judge Randall Rader. Here is the background of the judge taken from Wikipedia (with notes, marginal notations and headers omitted) and while you are reading look for his Nebraska connections:

Randall Ray Rader (born April 21, 1949) is the Chief Judge of the United States Court of Appeals for the Federal Circuit.

Born in Hastings, Nebraska, Rader received a Bachelor of Arts in English from Brigham Young University in 1974 and a Juris Doctorate from The George Washington University Law School in 1978. Rader served in staff positions on the House of Representatives from 1975 to 1980, first as a legislative assistant to U.S. Rep. Virginia Smith from 1975 to 1978,* then as counsel to U.S. Rep. Philip Crane, and legislative director of the United States House Committee on Ways and Means from 1978 to 1981. He then served as counsel to the United States Senate Committee on the Judiciary from 1980 to 1988. While counsel to the Judiciary Committee, he was Chief Counsel or Minority Chief Counsel for the Subcommittee on the Constitution and the Subcommittee on Patents, Trademarks, and Copyrights.

While on the Federal Circuit, Rader has served as a law professor, having taught patent law and advanced intellectual property courses at the University of Virginia School of Law, Georgetown University Law Center, Washington, DC, the Munich Intellectual Property Law Center, and The George Washington University Law School, Washington, DC. Rader is co-author of a casebook on patent law used at over sixty-five law schools. He has received many awards, including the J. William Fulbright Award for Distinguished Public Service, 2000. As an appellate judge, Rader has also led or participated in over sixty delegations to foreign nations, usually to teach rule of law or intellectual property concepts in developing nations.

Rader became Chief Judge of the Federal Circuit after former Chief Judge Paul Michel retired in 2010. Despite his new administrative duties, he continued to speak at law schools and at international conferences.

Rader announced his resignation as Chief Judge on May 23, 2014, to be effective May 30, 2014. Rader will remain on the court. Sharon Prost will succeed Rader as Chief Judge. His announcement came in the wake of his violation of ethical canons by sending a laudatory e-mail to a Member of the Bar of the Federal Circuit and asking that Member to show that e-mail to other Members of the Bar, creating the perception of an improper relationship between himself and Members of the Bar. Rader recused himself from a couple of cases he had presided over, due to the participation of the attorney in question.

As the foregoing suggests, Judge Rader sent an e-mail to a lawyer after a case had been submitted to the Federal Circuit. According to the Wall Street Journal, the substance of the e-mail and how it was subsequently used went something like this:

The judge sent the email in March to Edward Reines, a patent lawyer at Weil Gotshal & Manges LLP in Silicon Valley. The email, which was reviewed by The Wall Street Journal, described a recent conversation in which another judge purportedly told Judge Rader that Mr. Reines was “IMPRESSIVE in every way.”

In the email, Judge Rader said: “I was really proud to be your friend,” and encouraged Mr. Reines “to let others see this message.” He signed the note “Your friend for life, rrr.”

ASHBY JONES and BRENT KENDALL, Judge Who Recused Himself From Patent Cases Resigns as Chief Judge [,] Randall R. Rader Leaves Post as Chief Judge of Court of Appeals, Stays on the Bench, Wall Street Journal (Updated May 23, 2014 7:13 p.m. ET) (subscription may be required for some versions).

When the e-mail was shown to a client apparently as a marketing ploy, it became public. Rader in turn resigned as Chief Judge writing a full, frank and candid admission that he had violated the Code of Professional Responsibility** by lending the prestige of his office to the private interests of the lawyer. You can read the letter here. The judge described himself as “inexcusably careless . . . .” He was right.

A lot of ink has been and will be spilled on this matter. For example, many are in high dungeon, and will endeavor to use this screw up as a reason to bash the entire Federal Circuit and perhaps to do away with that specialized body altogether with the idea of sending patent cases back to the regional circuits as in days gone past.  I have no interest in that stuff.***

What I am interested in is the human aspect of Judge Rader’s error.  I think I have only had one occasion to meet the judge when he came to Lincoln to give the Cline Williams Jurist-in-Residence lecture in February of this year. I don’t recall knowing Judge Radar when he worked for Congresswoman Smith. 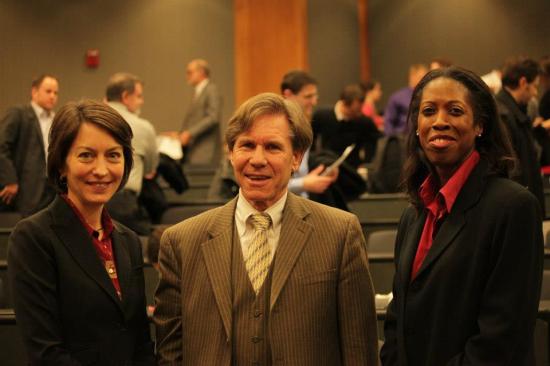 Here is my impression based on a one night of interaction: Judge Rader is a very bright judge and almost the perfect Chief Judge insofar as bench and bar relations are concerned. He is easy to talk to, he goes out of his way to be approachable, he is humble, he is self-effacing, I suspect he is an excellent teacher as his legal analysis is clear and easily understood, he seems truly sincere, and he is, without question, fun to be around without overdoing the “hail fellow well met” routine. I came away quite impressed.

What’s the point of all this? Well, there are two.

First, I venture to say that if you serve any length of time as a federal judge you will engage in an ethical lapse. God knows I have done that. Here’s one of mine: On being a dummkopf.  Like my mistake, these ethical lapses are most often the product of inattention rather than bad faith. No, that is too easy a description. More honestly put, the great bulk of the ethical errors are just plain stupid. But, federal judges, just like everyone else, are plainly stupid some of the time. If you think otherwise, you have not practiced law in the federal courts.

Second, for judges like me who like and respect lawyers, the urge to convey our appreciation to the best of the profession is a good professional and human quality. Federal practitioners and federal judges are at the most abstract level bound together in a common endeavor. In order to achieve that lofty goal, the bond between federal practitioners and federal judges at the street level needs to be strengthened and nurtured rather than weakened. We federal judges should let our practicing brothers and sisters know that we appreciate the good work we see turned in every day.

This is my sense of what motivated Judge Radar to write his overly effusive, but plainly improper, e-mail. His head was empty but I trust his heart was pure. That is not an excuse, but the judge’s effort to reach out to a member of the bar who apparently did excellent work does put a finer point on the judge’s conduct. A judge being appreciative of fine legal work and expressing that appreciation appropriately, and in the proper forum, is laudable.

In summary, I am no doubt giving Judge Rader the benefit of the doubt. I can’t know his heart. Hell, I don’t even really know him. However, given his past distinguished service (not to mention that he is a native Nebraskan), my presumption of good faith on the part of the judge strikes me as entirely justified. But, dear reader, that is up to you to decide.****

What I can say, and now say to Judge Rader, on a very personal level, is this: Go easy on yourself. Yes, you screwed up but you fessed up and there is nothing more than you can do. Don’t let the bastards get you down.

*As perhaps the leading member of the farm caucus in the House, Mrs Smith was a very, very, very powerful Member of Congress from the Third District of Nebraska. (The Third District is a huge expanse of cattle and corn and few people that covered Lexington, where I practiced law for 13 years.) I have it from multiple authorities (including the “shot caller” at DOJ) that President Reagan did not nominate me as federal district judge several months after I became a 40-year old Magistrate Judge because Mrs. Smith vigorously opposed my nomination. Keep in my mind that I stumped for her in the Third District and even substituted for her in a debate. But, when I prosecuted the impeachment of Nebraska’s Attorney General, a good man and stalwart Republican, Mrs. Smith made it known that I was “dead to her.” She was one tough cookie.

***I spent six years sitting with a judge from the Federal Circuit when we both served on the Codes of Conduct Committee writing confidential ethics opinion to judges and redrafting the Code of Conduct. In addition to being a brilliant scientist and first-rate lawyer, this man was deeply committed to the very hard work of the Committee. He was an absolute straight shooter. It would be grossly unfair to speak of Judge Rader’s lapse as a reason to smear the Federal Circuit on ethics issues without also acknowledging the work of my friend.

****Many thanks to Eric Hines, one of the most discerning lay persons I know, for stimulating my thinking on this subject. Of course, he shares no burden for the weakness of my views.