My late father-in-law, Bill Blank, was a surgeon. Some of you may remember that my first wife (Verdella) died of a heart attack at age 40 the day after Christmas in 1986. This was shortly before I became a United States Magistrate Judge in Omaha. Bill was her dad, and I loved him. He, too, died in 1986, at a medical conference, when his heart simply gave out. The year 1986 was not good to me. Yesterday, when considering Mr. Justice Jackson and his drive for education, I thought of Bill.

Bill came from very humble circumstances. He grew up on a farm in south central Nebraska near Franklin, Nebraska, a tiny town not too far from the Kansas border along the Republican river. Some of Bill’s relatives still farm there. 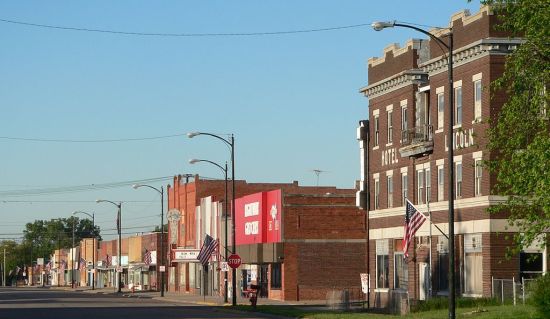 Photo credit: Ammodramus (released to the public without condition). Downtown Franklin, Nebraska: west side of 15th Avenue, looking south from between M and N Streets, May 31, 2010.

When I first met Bill and his daughter, Verdella, it was in Maumee, Ohio where I attended high school. We lived just down the street from each other. I had never been to Nebraska, and had no plans whatever to head out to where I was sure the Indians would scalp me should I have the temerity to venture that way. I certainly had never heard of Franklin, Nebraska. But, as luck or fate or something would have it, I ended up attending college in Kearney, Nebraska, and Verdella decided to attend Nebraska Wesleyan University in Lincoln, Nebraska, where her Dad attended and earned a degree in chemistry. Neither one of us knew that the other had come to Nebraska. Ultimately, we connected. Thereafter, Verdella and I marvelled at the fact that two kids from northwestern, Ohio, who knew each other there, would each come to Nebraska without the other knowing, meet again, marry and live (in Lexington) not far from where Bill began his life in central Nebraska. But, that’s another story.

In the late 19th and early 20th century, immigrant Germans flocked to central Nebraska where the land was both good and cheap. They were stocky, stolid, and often sad, as in dour and clinically depressed. Such was Bill’s father. His mother was quite different. Unlike Bill’s older brother who left school at 13 or 14 to help his father farm, Bill’s mother’s insisted that he attend high school. He was the first in the family to do so. He shined.

Upon graduation, and having attended the strict German Methodist Church of his day, Bill knew of Wesleyan. By living in the boiler room of the University and serving as the maintenance man for the institution, Bill put himself through college earning stellar grades. By then, the thrill of education was deep in his big bones. (Bill was tall, about 6’2″ and powerfully built.)

Off to Utah Bill went for a job as a chemist. While there, Bill earned a Master’s degree in chemistry and worked at the Kennecott Copper Mine. And, then he was off again to return to Nebraska where he would attend the University of Nebraska Medical School, putting himself through medical school and supporting his young family by using his chemistry skills to concoct a facial cream for women that sold like hotcakes.

Following medical school, Bill did his surgical residency in Denver and began his interest in colorectal surgery. The army followed with an assignment to Germany during WWII, and then, responding to an advertisement in Toledo, Ohio, a partnership in a small surgical practice. Board certified in general surgery and colorectal surgery,* Bill soon was recognized by his peers. He was elected as President of the Academy of Medicine, and, due to his well-known love of education, was selected to be among the first of the foundation trustees of what is now known as the University of Toledo College of Medicine and Life Sciences.**

If you go on the University of Toledo Medical School’s web site, you can see a list of scholarships. When Bill died, his partner established one in Bill’s name. It reads this way:

William A. Blank, M.D. Scholarship
Dr. William A. Blank was a colorectal surgeon in the community, a volunteer faculty member, and a member of the former MCO Foundation Board of Trustees. This scholarship, established by his partner, Dr. Abdullatif Nimr, is awarded to students who excel in the field of surgery. The scholarship honors Dr. Blank’s cordial relations with his patients and fellow physicians, and his great love for education.

Like Mr. Justice Jackson, Bill Blank overcame a very modest beginning through hard work and a love of education. It occurs to me that we could use more of this type of person in our daily lives.

*That Bill was physically able to become a surgeon is an amazing story. As a boy, the index finger on Bill’s right hand (his dominant one) was chewed up in a corn grinder. When Bill operated on the belly of a sick patient, that finger, because it no longer flexed at the joint, stood straight out. I remember Bill telling me of the hours and hours and hours he spent practicing tieing surgical knots with that one hand and crippled finger in order to overcome the disability caused by that stiff appendage.

**Ironically, Jeffrey P. Gold, M.D. became Chancellor of the University of Nebraska Medical Center in February of 2014.  Prior to joining UNMC, Dr. Gold served as Chancellor of the University of Toledo’s health science campus, which includes the Colleges of Medicine, Nursing, Pharmacy, Health Science and Human Service, and Graduate Medical Study. Bill would have been proud, having graduated from UNMC and having served as one of the founders of UT’s medical school.