There is a lot of talk about reducing federal prison populations. This discussion is almost always connected to the exercise of judicial discretion by federal judges.  For example, see the very thoughtful article entitled A ‘Holocaust in Slow Motion?’ America’s Mass Incarceration and the Role of Discretion written by Professor Mark Osler and my friend Judge Mark Bennett. These discussions are premised on two related ideas: (1) the federal prison population is comprised of many people who don’t need to be there and (2) if federal judges would only exercise their discretion, they would learn that a large number of guilty people who appear before them don’t need to go to prison.

The problem I have with this talk is that (1) most of the guilty people I see ought to be in federal prison and (2) I am no good at distinguishing between those who should go to prison and those who should remain out of prison.  And that realization in turn reminds me of the following cartoon which perfectly captures my views about the rush to reduce federal prison populations through the exercise of federal judicial discretion: 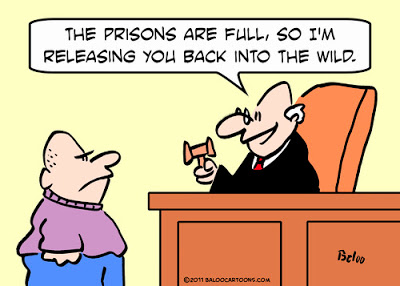