With many, many thanks to Elaine Mittleman who downloaded and shared with me a file pertaining to the late Judge Richard Arnold from an October 10, 2014 release of information by the Clinton Library, I am delighted to reproduce a draft of a speech prepared for President Clinton to use when nominating Richard to a seat on the Supreme Court. The time frame is May of 1994–the precise date of the e-mail appears to be May 13, 1994.

The draft speech was evidently prepared by David Dreyer and was sent to Donald A. Baer and Robert O. Boorstin. These men were all White House aides to President Clinton and served on his communications team. The subject line of the e-mail is interesting and states: “Updated Version. Don’t Assume a Decision, It’s Chinatown.”

Of course, President Clinton did not nominate Judge Arnold on May 13, 1994 or at any other time. Richard had long suffered from lymphoma, and the President reluctantly decided that Richard’s health was too much of a gamble. Instead, President Clinton announced Stephen Breyer as Justice Blackmun’s replacement on May 13, 1994, with the United States Senate confirming Breyer on July 29, 1994.

What follows is the President’s speech on Judge Arnold that was never given. Page one: 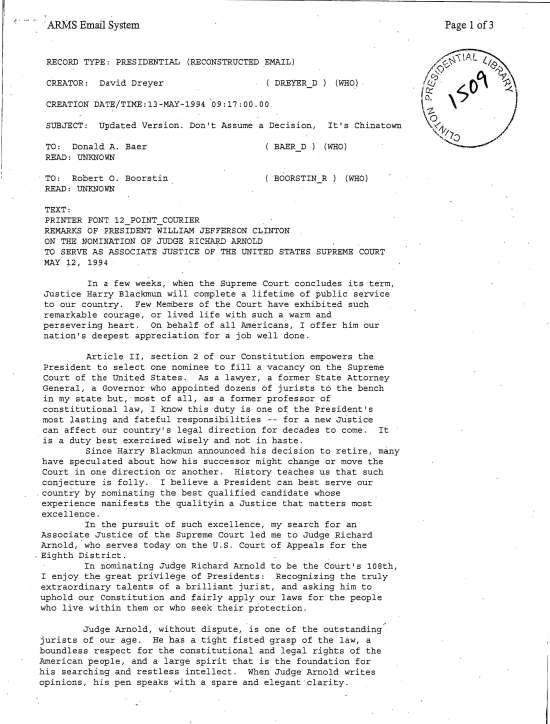 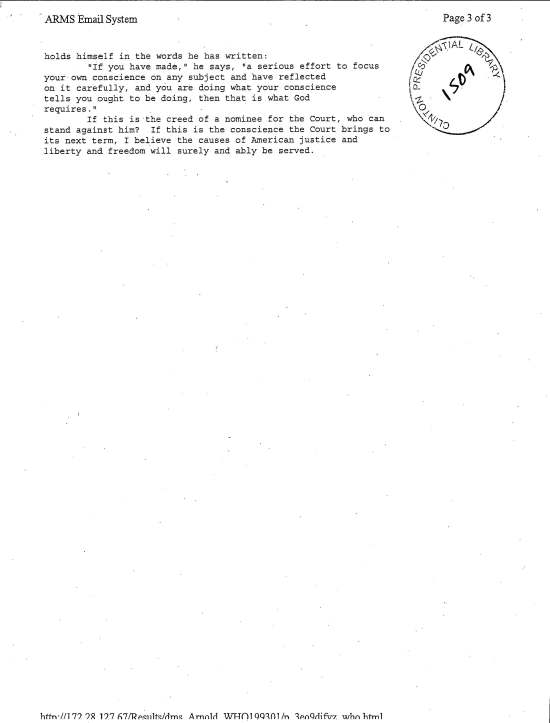 As I have said before, and with no disrespect to Justice Breyer, it is a tragedy that Judge Arnold never had the opportunity to sit on the Supreme Court. Our nation is worse off as a consequence.

If you don’t believe me, please watch this video of the “The Art of Judging,” an address by Richard before the Eighth Circuit Judicial Conference, held on August 8, 2002 in Duluth, Minnesota. If nothing else, watch the first part of the video (starting at about two minutes) where Richard tells the story of his confirmation hearing as a district judge. As much as anything, that vignette tells you all you need to know about Richard and why other judges throughout the nation revered him.