For those of you, like me, who are huge supporters of PACER, the sister system CM/ECF, and the issue of transparency more generally, please read Brian Browdie’s great article entitled Why Pacer should (and should not) be like Edgar, Quartz (November 24, 2014).*  Transparency advocates want PACER access to be free. But there is a problem (nothing is “free”), and I want your help in addressing that problem.

First, you need to know the basics. Here they are:

* “Pacer holds records for roughly 43 million cases, according to the Administrative Office of the US Courts, which manages the database.”

* “In practice, Pacer’s fee structure means that three-quarters of people who use the database pay nothing.”

* “Pacer has about 1.6 million user accounts, but most of the 500 million requests the database receives annually come from law firms; commercial publishers such as Reed Elsevier, Bloomberg and Thomson Reuters; and the Department of Justice (DoJ). These and other power users accounted for about 70% of Pacer’s $146 million in revenue in the fiscal year that ended on Sept. 30, 2013, according to the Administrative Office.”

*  “As the chart[s] below shows, [the revenue is] used to cover outlays for the filing system, CM/ECF ($32.1 million); video monitors, audio and other electronica that courts need to stage trials in the 21st century ($31.5 million); and the telecommunications, broadband internet and security systems that allow access to 197 databases around the country but keep hackers at bay ($27.5 million).” 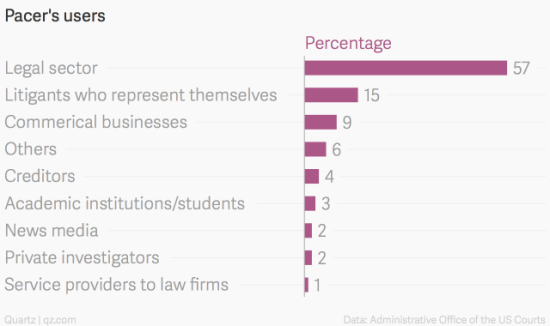