Qantas with no notice on-line or otherwise just cancelled our flight. The only way I found out is that the computer would not give me a boarding pass. Got a nice Aussie person on the phone who mumbled something about the crew needing to rest (after, I imagine, a night of drunken debauchery at the strip clubs in Dallas).  Best laid plans and all.

It is very early in the morning, but the good thing about gin is that everyone tells me that they can’t smell it on my breath even though they walk quickly away with horrified looks. Anyway, since Qantas is an inanimate object, the company’s high-handed behavior makes me want to smack the crap out of a kangaroo!

Oh, good.  There is a place where that actually happens: 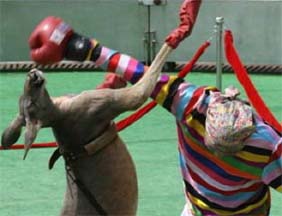 Photo credit: Getty Image. A kangaroo take a hard right that serves as a blow to the animal team’s claim of boxing dominance. Team human is represented by man in a clown suit at the annual Animal/Human Olympics in China.