“The massive hack that may have stolen the personal information of four million federal employees appears designed to build a vast database in what could be preparation for future attacks by China against the U.S., cybersecurity experts advising the government told CNN Friday afternoon.”

Our government, with the aid of the Mossad, unleashed the stuxnet computer virus on Iran. That caused Iranian centrifuges to spin wildly out of control thus slowing Iran’s ambition to play with nukes like the big boys.

OK, I get it. If the Iranians developed and dropped a nuke on Saudi Arabia it would drive down judicially approved beheadings to unacceptable levels. If Israel got atomized by the Supreme Leader, there would be a world-wide shortage of matzoh bread. I love to eat that stuff slathered in butter. Some hacks like these make perfect sense.

While our government was out stuxneting, the Chinese Cyber Army seems to have been breaking into a lot of our government’s computers. But, so far as I know, they have not yet hacked my government laptop that I attempt to use at home to remain productive. That stark omission annoys the hell out of me.

Indeed, I need and desperately want Chinese hackers to show me an easy way to get into my government laptop. Here’s why.

Let’s say I need to read a super secret e-mail from the GSA telling me that building occupants should not use the east entrance because the revolving door had crushed another citizen and GSA was unwilling to violate OSHA standards to extract the corpse from the machinery. The following is what I would have to endure to read this critical bit of information:

Now, I suppose I could go to our own IT staff. But that will not work. First, they scare me. This rough bunch wear ninja outfits and cover their faces with ski masks. Moreover, they take a blood oath to protect the secrecy of information like the GSA crushed-corpse e-mail. Hence, they would just as soon not have me use the laptop, and they are happy clams when I get locked out. 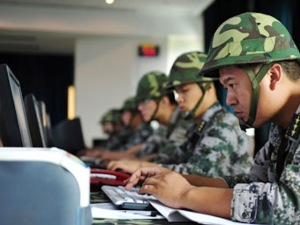 So, I say to the Chinese Cyber Army: I know you can help me. Hack my laptop, and then send me your simple work around. Don’t send it to my government e-mail ’cause chances are I won’t get it. Instead, send your fix to my Gmail address, Hercfriends@gmail.com. Google remembers everything for me–I don’t have to think, and that is a major plus.

This request, of course, assumes, that you–the elite Cyber Army of the PRC–have not blown your brains out reading the crap on my device. Stay strong comrades (强留同志). I’m depending upon you.

By the way, would any of you be willing to remove a crushed corpse from a revolving door? The stench is becoming worrisome.