This is a post about the “free exercise” clause of the First Amendment. At least it is if you, like me, see connections between events that have no apparent connections.

Jim and Jenna married in a very old Catholic church on Chicago’s near west side. For those of you who know a little of Chicago, the historic Holly Family Church is situated adjacent to St. Ignatius College Prep. The inside of the church is stunning. It certainly impressed me, including especially the black boxed pews that were hard as black onyx on my butt. 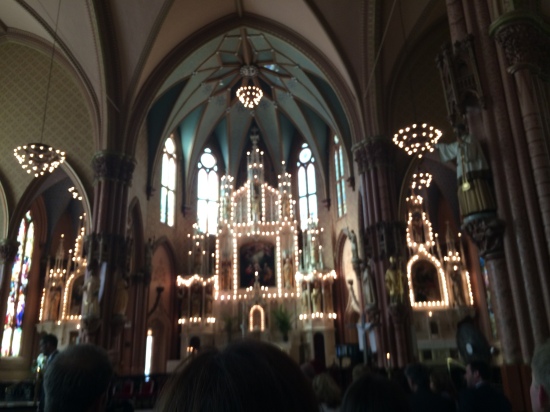 When we left wedding dinner at the old Spiegel warehouse, now the BridgeportArt Center with a fantastic view of the Loop skyline at night, we took a cab back to our hotel. The driver was from Kyrgyzstan. He was bright, well spoken and thoughtful. We had an interesting conversation about the driver’s life and his belief in Islam.

I love to talk to cab drivers. I don’t get a chance to take cabs very often. When I do, it is an unexpected treat. That tells you something itself.

I tipped the cab driver too much when we reached our hotel. Sincerely, and although it was not that much, he said the tip made his day. That made me feel good. As we walked into the hotel following the very Catholic wedding and our conversation with the true believing Islamic cab driver, I thought of George.

My cousin, George, is a Jew, but that was not always so. He is roughly three years younger than I am. As kids, I used to beat the crap out of George and my brother, Kip, simply because I could. They tolerated my attacks with good humor, taking a certain pride, I think, in scattering this way and that as I chased them. Of course, George survived my violence, and went on to live an interesting life.

After graduating from high school in Toledo, Ohio in the late 1960’s he studied journalism at the University of Missouri, then returned to his home town to teach and obtain an MA. He became a Peace Corps Volunteer, and then joined the State Department as economics and consular specialist. He subsequently lived and worked in Tunisia, Mexico, Yemen, Jamaica, Algeria and Namibia as well as traveling on assignment throughout Europe and the Mediterranean world.

When he reached the mandatory retirement age,  George got out the State Department, moved to south Texas near Mexico (he had done consular work in Matamoros) and converted to Judaism. After spending years and years in North Africa and elsewhere, he converted to Judaism and in he did so in Texas? Why? I have no idea. But, I trust George.

Oddly, and despite the fact that he was raised an an Episcopalian, George looks Jewish, whatever that means. He is a small man with a pleasant, gentle and unassuming but serious persona. Part of George’s seriousness is his commitment to those things in which he believes. He is committed to his faith like he was committed to the good works he performed in the Peace Corps and the State Department. The same goes for Grace, his wife who, too, served all over the world as an an Air Force nurse. She converted too. Well, I say she did, but maybe she was always Jewish–I don’t know.

George and Grace are doing volunteer work in Haifa, Israel.  George, who is a talented writer, keeps his friends in the State Department, academe and family updated on their experience. I received an update recently, and it stuck and flowered in Chicago after the wedding and our talk with Kyrgyz cab driver.

Perhaps you will find George’s update interesting, and see the connections that I see. Take a chance and read on:

One of the things that Grace and I have had to adjust to in Israel is how secular life appears to be, at least in our city of Haifa. That probably seems like an odd observation to make about life in the Jewish state, but as we have moved through the first 90 days of our experience in Israel, it has been hard to avoid the thought that most of the Jews we’ve met don’t seem to be doing much about Judaism. Courses in Tanakh (the Jewish Bible) are mandatory at school, and the stores and most public transportation shut down on Friday afternoon for Shabbat, but for many people Friday night is a time to go out to dinner and Saturday is for sleeping in, picnicking, going for a drive in the country, or hanging out at home. The Beit Knessets (Synagogues) we pass are not particularly inviting places, overwhelmingly Orthodox, and populated by stern-looking old men in black suits. They don’t seem to involve women or kids. In speech, where an American Jew would use the word “observant” to describe someone who attends services or who would refrain from commercial activities on Shabbat, an Israeli will use the word “religious” — and frequently use it in negative context with overtones of “difficult,” “demanding,” or ”irritating.” In sum, it has been difficult to avoid the conclusion that religion plays a different and even smaller role in the lives of our new friends in Haifa than it does for our many Jewish and Christian friends in south Texas.

Coincidentally, about the time we were reaching this conclusion, a similar theme emerged from conversations I had with Rabbi Ofek Meir, the principal of the Leo Baeck middle school where we teach, and Rabbi Na’ama Dafni-Kelen who is one of the rabbis at Ohel Avraham, the Reform Temple located at Leo Baeck. My interviews with them were independent and I did not specifically question them about secularism or a lack of spiritual or religious values in Israel. But when I asked them about problems LBEC students and parents faced, here is how they replied:

Ofek Meir: “They need what all people in Israel need: a sense of community and a sense of connectivity to one another. We are rich in information, but becoming poorer in spiritual values so many of the parents are confused about right and wrong, because their lives are missing connectedness and love. Our biggest day-to-day challenge is getting back to the importance of nurturing and cherishing our basic relationships. It’s clear in the Bible that 95 percent of the Jews 3,000 years ago spent most of their time being completely lost. 95 percent built the golden calf. So being confused and spiritually lost is not a new problem. But technology can amplify it. Each life has the potential for either a great number or a small number of meaningful moments, when identity, spirituality and relationships reinforce one another. What we’re trying to build here is a potential in our students for meaning to exist.”

Na’ama Dafni-Kelen: “Most of the Israelis who attend Ohel Avraham are first generation synagogue goers. So they are still learning what it means to be a member of a congregation. And the vast majority of our students’ parents at Leo Baeck are entirely unaffiliated and unfamiliar with Jewish religious practice. This has to do with Israeli history. These people’s parents or grandparents came to Israel as pioneers. They had no religion and in many cases were opposed to religion. So what we are seeing in Israel now is a Jewish renaissance. And that’s good, but it’s very challenging. We have 2500 families in Haifa with kids at LBEC and 4000 families if you include everyone we serve at our community centers. Very few of them have had any contact with Judaism as a spiritual force in their lives. So we are focussed on developing family-oriented programs to bring more parents to us.”

Reviewing my notes on these conversations, I found them to be both validating and troubling. Validating because both of these community leaders seemed to be reacting to the thing that we had been sensing, a lack of spiritual dimension in lives we were encountering in Haifa. But troubling because their expectations about getting students and parents involved in Ohel Avraham outpaced the reality of the few dozen congregants we observed turning up for services. This disconnect was not relieved by my asking the classroom teachers if they ever attended Friday evening services. Most made it plain that after a week of teaching they weren’t much interest in attending.

I was disturbed by the disinterest that otherwise vital, smart Israelis have in their own religion. But let me share some notes I made on a conversation I had with Ayelet Shatzov, the seventh grade student counselor. It’s her job to meet with both students and their parents on school performance, but she takes a real interest in her students’ overall development and is frequently asked to accompany groups of LBEC students on trips overseas. Here what she said:

“For most of our students and parents, having a synagogue here at their school is not really that important a consideration because here, being a Jew is automatic. In Israel, we are Jews by default. My mother was a Jew, my father was a Jew so I am a Jew and my daughter is a Jew. The stores close on Friday afternoon and the holidays are observed automatically. So being a Jew here is the default position; it’s not something you need to think about.

“Taking a delegation of kids to New York, the kids said they were shocked when the city didn’t shut down on Friday afternoon. And that made me realize that to be a Jew in the United States, you have to take an action, you have to do something about it if you are going to observe Shabbat. So maybe there is something lacking in Judaism in Israel; maybe it’s too easy for us. My daughter and I have been talking about her need to have a spiritual experience and we’ve decided to send her to the Greene family camp in Texas this summer. Do you know it?”

Of course I had to laugh. Ayelet didn’t know that I was from Texas or that our congregation supported the Greene Camp by helping our teens to attend, but I explained to her how I did know the camp and we both got a chuckle over the weirdness of an Israeli parent sending a kid to Texas to develop spiritually. But under the surface, maybe there is more than a joke here. Is there that much difference between Grace and my sampling Jewish life in Israel and Aylet’s daughter’s trip to Texas to attend Jewish summer camp? Maybe the two experiences share a common thread in what William James called the variety of the religious experience. In Israel, the stores close on Shabbat and in the U.S. they close on Christmas. But on a personal level, letting religion play a role in our lives requires some sort of action, of making a commitment to a church, synagogue or a charitable activity that is going to call for physical or psychological movement, a journey for those who decide to embark. And that decision — to move away from a purely secular life style — is a deeply personal one whether one lives in the Jewish State or the United States.

More later, all the best – G&G

Yup, this is a post about the “free exercise” of religion and our First Amendment guarantee of that right.  At least, that’s the way I see these disconnected things. But it might be chemo fog too.