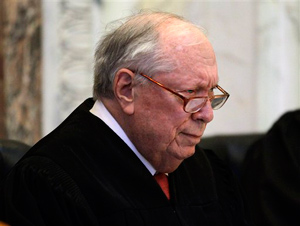 With a tip of my hat to How Appealing, I urge federal practitioners of habeas corpus cases challenging state convictions under 28 U.S. Code § 2254 to read Stephen R. Reinhardt, The Demise of Habeas Corpus and the Rise of Qualified Immunity: The Court’s Ever Increasing Limitations on the Development and Enforcement of Constitutional Rights and Some Particularly Unfortunate Consequences, University of Michigan Law Review (May, 2015). The author is a judge on the Ninth Circuit Court of Appeals, and a liberal icon of the first rank.

This essay is a scathing criticism of the Supreme Court, starting with the abstract:

The collapse of habeas corpus as a remedy for even the most glaring of constitutional violations ranks among the greater wrongs of our legal era. Once hailed as the Great Writ, and still feted with all the standard rhetorical flourishes, habeas corpus has been transformed over the past two decades from a vital guarantor of liberty into an instrument for ratifying the power of state courts to disregard the protections of the Constitution. Along with so many other judicial tools meant to safeguard the powerless, enforce constitutional rights, and hold the government accountable, habeas has been slowly eroded by a series of recent Supreme Court rulings that aim ultimately at eliminating that judicial method of protecting individual rights.

In this age of calls for the near-total abolition of habeas and scathing rebukes of judges who fail to toe the not-so-hidden party line, it is easy to lose sight of how we got here. It is convenient to blame it on inevitable historical or jurisprudential trends, or to insist that it followed necessarily from passage of the Antiterrorism and Effective Death Penalty Act (AEDPA). One can then proclaim that there is no reasonable alternative to the Supreme Court’s present construction of that statute, even though any participant in our habeas regime would have to agree that it resembles a twisted labyrinth of deliberately crafted legal obstacles that make it as difficult for habeas petitioners to succeed in pursuing the Writ as it would be for a Supreme Court Justice to strike out Babe Ruth, Joe DiMaggio, and Mickey Mantle in succession—even with the Chief Justice calling balls and strikes.

Reinhardt’s wonderfully written essay (that I don’t agree with) brings up the past for me. It reminds me of another liberal icon of the first rank who hailed from the high plains. Donald P. Lay was one of the longest serving chief judges of any circuit (1980-1992) and one of the youngest men ever appointed to a court of appeals.* He wrote a similar piece years ago. It was published in the Minnesota Law Review (where Lay was also the James A. Levee Professor of Criminal Procedure). See The Writ of Habeas Corpus: A Complex Procedure for a Simple Process, 77 Minn. L. Rev 1015 (1993) (unfortunately, the article sits behind the Hein pay wall).

Liberal judges like Lay and Reinhardt regard the “Great Writ” with a reverence that borders on the religious. Most of the time, I regard habeas corpus cases as being a time-consuming and futile pain in the ass.

The vast majority of habeas petitions have no merit even under the most liberal standard of review. See my earlier post entitled “The High Cost of Snipe Hunts” (noting among other things that excluding death penalty cases, only .45% of the some 16,000 federal habeas cases filed annually resulted in granting relief to the prisoner),

While I disagree with much of what Judge Reinhardt has written, his essay should be read by anyone who labors on federal habeas corpus matters. It is an important contribution to the literature on habeas corpus and an unsually frank examination of the Supreme Court’s jurisprudence on this subject.

*Lay had practiced law in Omaha, Nebraska at the time of his appointment. So had my mentor Don Ross. Despite the fact that Lay later moved his chambers to Minnesota, when I clerked for Judge Ross, Lay’s chambers, like the chambers of Judge Ross, were in Omaha. I remember once standing between the two men who disagreed on a case and doing so intentionally. I was scared shitless that the confrontation might become physical. Lay was short, very aggressive and had a temper to match. Ross was tall, taciturn and, while slow to anger, had a volcanic temper too. Thankfully, the men did not come to blows.