Joan, my wife, was born in Shanghai which is now the largest city by population in the world. Her mother and father had met and married in China during WWII. John was an officer in the Army Air Corps and Florence was a secretary for the State Department. After the war ended, they remained in China and John imported goods from America. Of course, they left when Chairman Mao and the gang came to town.

In the early 1990s, Joan and I traveled to Shanghai. We hired a very experienced guide who spoke English as if she had been born here. She was open about the fact that she had polished her English while in the Chinese Army monitoring American military traffic.

We had a wonderful time, and may have found Joan’s home in the old French Quarter. We parked the car near where the guide thought the home might have been and got out and spread a large old map on the hood of the car.

We soon drew a crowd of friendly Chinese. There were several old people who gave various opinions about whether we had found the home. If we did find the home, it had changed dramatically. It was now a multi-family dwelling that stretched to the street. The front gardens of Joan’s time were gone.

This silk piece hangs in our living room in Lincoln, Nebraska. It came from Joan’s home in the French Quarter of Shanghai circa 1946-1949.

Daughter Lisa and her family live in China (Shekou) across the bay from Hong Kong. Lisa and Karel are teachers. Petra, who was born in a Chinese hospital in Guangzhou (formerly Canton), has “her” ayi (阿姨 – āyí) (“aunt” in Chinese) who she loves dearly. This very nice woman (we have “met” her on Skype numerous times), who speaks no English, looks after the kids when Karel and Lisa are gone. As a result, and even though she is not yet five, Petra is picking up Mandarin and a lot of Chinese culture to boot. (Ayi’s grandaughter and Petra are good friends.) 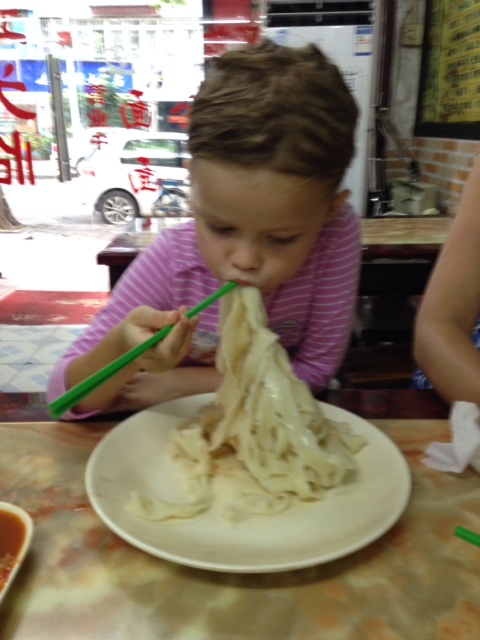 I hope Lisa, Karel and the grandchildren stay in China. There is so much there to learn and the people are wonderful. The “slippery” noodles are good too.

*“The Chinese like their noodles long and slippery, the better to slurp down noisily.”  The Cook’s Thesarus: Asian (last accessed July 20, 2014).