One could argue that the Supreme Court is by far the most consequential organ of our federal government in 2015. After all, it will decide whether national health insurance will be national, and whether the states will be required to authorize the marriage of gays. The paralysis that we see in the relationship between Congress and the President is not a problem for the Court. It will decide, and, like it or not (please listen Mr. Huckabee), everyone else must follow.

The foregoing is why you should read Tony Mauro’s piece entitled Big cases, but little room at court: Column, USA Today (January 29, 2015).  How can it be that at most the Court’s functioning can be watched by no more than 200 regular citizens at a time?

Chief Justice Robert’s seeming wry embrace of the hidebound traditions of the Court aside, it is long past time that arguments be televised and shared with the world. By making transparent our own modern Oracle of Delphi, the ravings of the Pythia, and the translations of the high priests into elegant prose, might even end up being believable to we, the great unwashed. Plainly, plebeians like you and me desperately need to believe in something.

“Out of my mouth came, ‘When and if I retire, I’m going to go back to the district court,” Sotomayor said, recalling her six years in the 1990s as a judge on the U.S. District Court for the Southern District of New York. “Why would I want to go do what I’ve been doing for however many years it’s been on the appellate court and the Supreme Court?”

She continued, “I want to go back to my first love. And the district court is a very different and exciting place. At least for me, it was the formative experience for preparing me for the [Supreme] court.” (Her remarks are at the 1:13 mark of the conversation, available on YouTube.)

Good for the Justice. I hope she means it.

But, let’s go the Justice one better. Instead of going off to Salzburg or wherever over the summers to teach (and engage in all manner of other pleasant things), why don’t the Justices resolve to try cases to juries in the United States District Courts. And I mean every Justice, even the ones who think they are too smart to set forth in a trial courtroom.

Go to the sticks or some place where the Justice doesn’t know the local legal culture and take a case to a jury trial–a place and a case that would make the esteemed feel uncomfortable and require him or her to rub shoulders with real trial lawyers. Try a criminal case with several defendants involving a drug conspiracy and a bunch of statements raising Federal Rule of Evidence 801(d)(2)(E) problems, or a patent case involving a magic new manure spreader and requiring jury instructions that don’t read like Supreme Court opinions, or a contract case for the production of complex software where no one has yet to figure out what the judge is supposed to do during trial regarding the terms of the contract as contrasted with what the jury is supposed to do with those same terms during deliberations. Draft a verdict form, prepare jury instructions, make rulings on evidence, do a jury orientation, hold bench conferences, decide whether you want a court reporter or digital audio, determine whether to allow recross, decide if lawyers may move freely about the courtroom without your permission, conduct a voir dire and rule on whether the lawyers get to ask questions too, and so forth. Oh, and over the noon hour, conduct two or three sentencing hearings in criminal cases.

Such a practice–trying real cases to real juries with real lawyers in real places–would expand exponentially the horizons of all the Justice (even Sotomayor who spent only six years as trial judge–a mere blink of time for most of us). It would also give the hard-working and long-suffering judges of the Courts of Appeal an opportunity to reverse a Supreme Court Justice for making perfectly idiotic rookie mistakes–and that would be very good for the souls of the rest of us and the Justices too.

Like Loading...
November 4, 2014 By RGK in Uncategorized Tags: clock in the Supreme Court, Roberts and Rehnquist, Tony Mauro 6 Comments
According to a fascinating piece written by Tony Mauro*, the clocks in the Supreme Court weren’t working properly yesterday after the onset of standard time. “As the court chamber filled in anticipation of oral arguments, spectators noticed that the stately clocks hanging above the bench and at the back of the court were also showing the wrong time—and differing wrong times at that. When the session began, the front clock was hours off, and the rear clock was showing 3:50.”

Photo credit: John Marino per Creative Commons Attribution 2.0 Generic license. The image has not been altered.

Chief Justice Roberts cautioned the lawyers not to rely on the clocks. The Chief added: “You should not look at the clock anyway, but particularly not today,” Mauro then relates an incident involving Chief Justice Rehnquist and the clock over the bench:

In warning that advocates should not look at the clock, whether functioning or not, Roberts was channeling his former boss, mentor and predecessor William Rehnquist.

It was 1989 when Barry Goldstein, then a lawyer for NAACP Legal Defense and Educational Fund, made the mistake of looking up at the clock while arguing in Lorance v. AT&T Technologies, an employment discrimination case.

Rehnquist had started to ask a question, and Goldstein, probably trying to pace himself, glanced upward to see how much time he had left.

“Don’t look at the clock,” Rehnquist snapped. Goldstein apologized, but Rehnquist was clearly still annoyed that he had paused before answering. “You’re here to answer questions as well as to talk,” the justice said.

Does it strike anyone as just plain screwy that a clock hangs above the bench but lawyers aren’t supposed to look at it upon pain of an ass-chewing during oral argument? 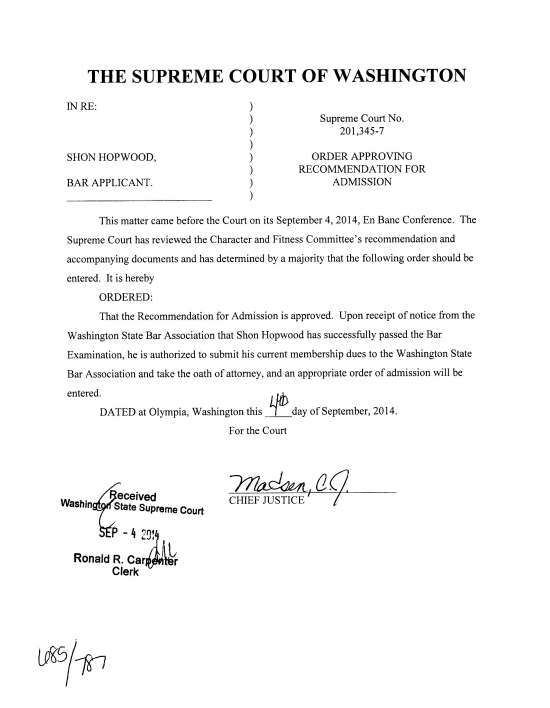 Shon and his pretty family upon graduation from the University of Washington School of Law, where he was a Gates public service law scholar.

Tony Mauro and Howard Bashman have my personal thanks for following Shon’s journey and keeping his struggles and aspirations in our consciousness. They have done an important public service by reminding we cynical types that redemption is possible in the real world just as it is in story books–and that’s even true for a bank robber turned would-be lawyer like the truly remarkable Shon Hopwood.*

*For my previous posts on Shon see here and here.

I am going to toot my own horn. Please understand, however, that my horn is tin and I can (and, in any event, should) only produce a weak toot.*

Tony Mauro is a Supreme Court correspondent for the The National Law Journal and the Supreme Court Brief. He is a member of the USA TODAY Board of Contributors. He is one of the most highly respected legal journalists in the nation.

Last night, Mr. Mauro posted an opinion piece in USA Today that was very supportive of my blogging efforts (“Kopf’s a voice worth listening to — hopefully for many years to come.”) In addition to being flattered, I took his support as an encouragement to continue my efforts. That support means a lot to me coming from someone with the impeccable reputation, skills and experience of Mr. Mauro.**

*My lab numbers fell very low when they sucked blood from my port on Tuesday. This is not a surprise. My breathing is labored and I walk like the old man I am becoming. That said, I can still toot a little.

**I also feel an increased obligation to do the absolute best job I can.

Earlier, I posted a photo of Roscoe Pound’s circular desk at Harvard. Today, I post a picture of Richard Arnold’s oval desk in Little Rock. These were two supremely gifted men of the law who understood that having “no distinguishable sides” was not a bad thing, but rather a beautiful thing.

This copy of a photo showing Judge Richard Arnold’s oval desk was kindly supplied by our Circuit Librarian, the marvelous Ann Fessenden. The original photo was taken on Wednesday, September 29, 2004. Judge Richard Arnold died on September 23, 2004 as a consequence of an infection he suffered while being treated for Non-Hodgkin’s Lymphoma (of the indolent type) at the Mayo Clinic in Rochester, MN. He had suffered from, and had been treated for, the disease since 1975. Upon Richard’s death, his brilliant brother (Morris (Buzz) Arnold), a Republican at the time of his appointment as an Eighth Circuit Judge, said of Richard, a Democrat at the time of his appointment as an Eighth Circuit Judge,* “He was second to none in the country. I mean that literally.” According to Tony Mauro, who has covered the Supreme Court for over 30 years: At the time of Richard’s death, eight Supreme Court Justices published tributes to his fairness, judicial restraint, and eloquent and influential judicial opinions.  It is hard to imagine, these days, eight Supreme Court Justices agreeing on the time of day. But, Richard’s unique spirit and remarkable gifts brought people together. He was, as Professor Polly Price of Emory said, like Learned Hand, “perhaps the best judge never to serve on the Supreme Court.”